The Starlink Internet is on track with a 2020 availability for Canada and Northern United States, but it is only a private beta. There has been much speculation over the network specifications. Instead of throwing around empty numbers, we derive a baseline from known satellite network protocols and physics.

Here is what one can expect of the initial launch of the Starlink Internet:

The Internet will be fast and well covered for the northern part of US. Remote communities in Canada will finally have a fair change to a usable world-wide-web. With an estimated latency ranging from 24ms to 32ms, the speed is comparable to accessing a website in Stockholm, Sweden from London, England. It is faster than the fiber-optic round trip between Newark, New Jersey and Los Angeles, California. Almost twice as fast to be exact.

If you care to find out how we came to the above statement, please read on.

One detail that many of these articles fail to mention is that Starlink satellites are not on a typical LEO altitude of 2,000 kilometers. Instead, they fly just a bit higher than the GOCE satellite, which is designed to study the Earth's gravitational field. 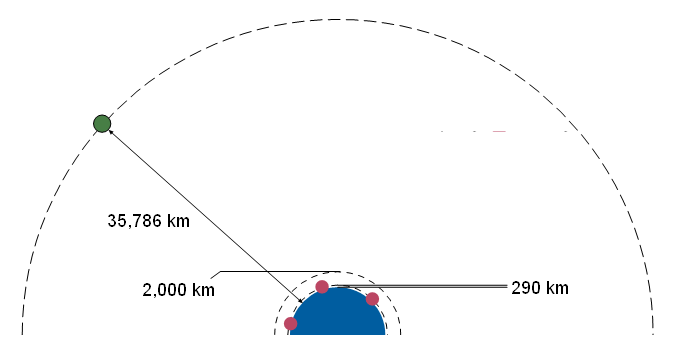 As seen in the above diagram, the low earth orbit hugs the earth much closer than the geostationary orbit. The Starlink orbit is another order of magnitude closer.

The BGAN satellite internet has a round trip time between 900 to 1700 milliseconds. A typical measure of BGAN is 1500 ms. Since BGAN networks use geosynchronous satellites that are about 35,786 kilometers from the ground, we can interpolate the expected latency on a lower orbit:

At 2,000 km, the latency would be 80ms. Starlink satellites are closer, so their round trip time is only 12 milliseconds.

We must remember, however, that the BGAN measurement is strictly between the device and the satellite. A realistic Internet ping between a Starlink client and a data center includes two round trips. The angle of the satellite must also be factored in:

The best case scenario is exactly twice the shortest distance, which is 24 ms. At a 45 degree angle, the time is expanded by 1.414 times, or the square root of 2. This gives a higher estimate of 34 ms.

We sampled the ping time between a few data centers for comparison:

The reason we focus heavily on latency instead of bandwidth is because our web products are efficient with network data. Typical requests and responses are well contained within a single network frame.

When a request or response contains too much data, the transmission is split into multiple units, or "frames". Some of these frames could get delayed or lost. The TCP protocol ensures that all the frames arrive in the correct order. This means the delayed packets are silently transmitted. Transmitting large data payload takes time, so does retransmission. All the while, the Starlink satellites are flying away. Since the first generation satellites do not have inter-satellite laser link (ISLL), the burden of seamless and continual connectivity is on the Starlink client device.

The bottom line is that our web products such as Gyroscope applications and FFC powered e-commerce solutions will work noticeably faster and more responsive than their competition. Wait until Starlink becomes publicly available and see for yourself.

We have a keen interest in activating the economies in Canada's Northern communities, which are currently severely under served. A key to these regions' development is not only internet access, but also access to quality web services that we focus on creating.

The first step is connectivity.

Starlink internet will play a vital role in unlocking these remote regions. However, without proper investment in local network infrastructure and regional data centers, these under served communities, indigenous communities in particular, will miss out again on achieving a sustainable economy.

It is imperative that ground relay stations and ground fiber network be established before Starlink becomes publicly available.

We will cover the topic of northern network in future articles.